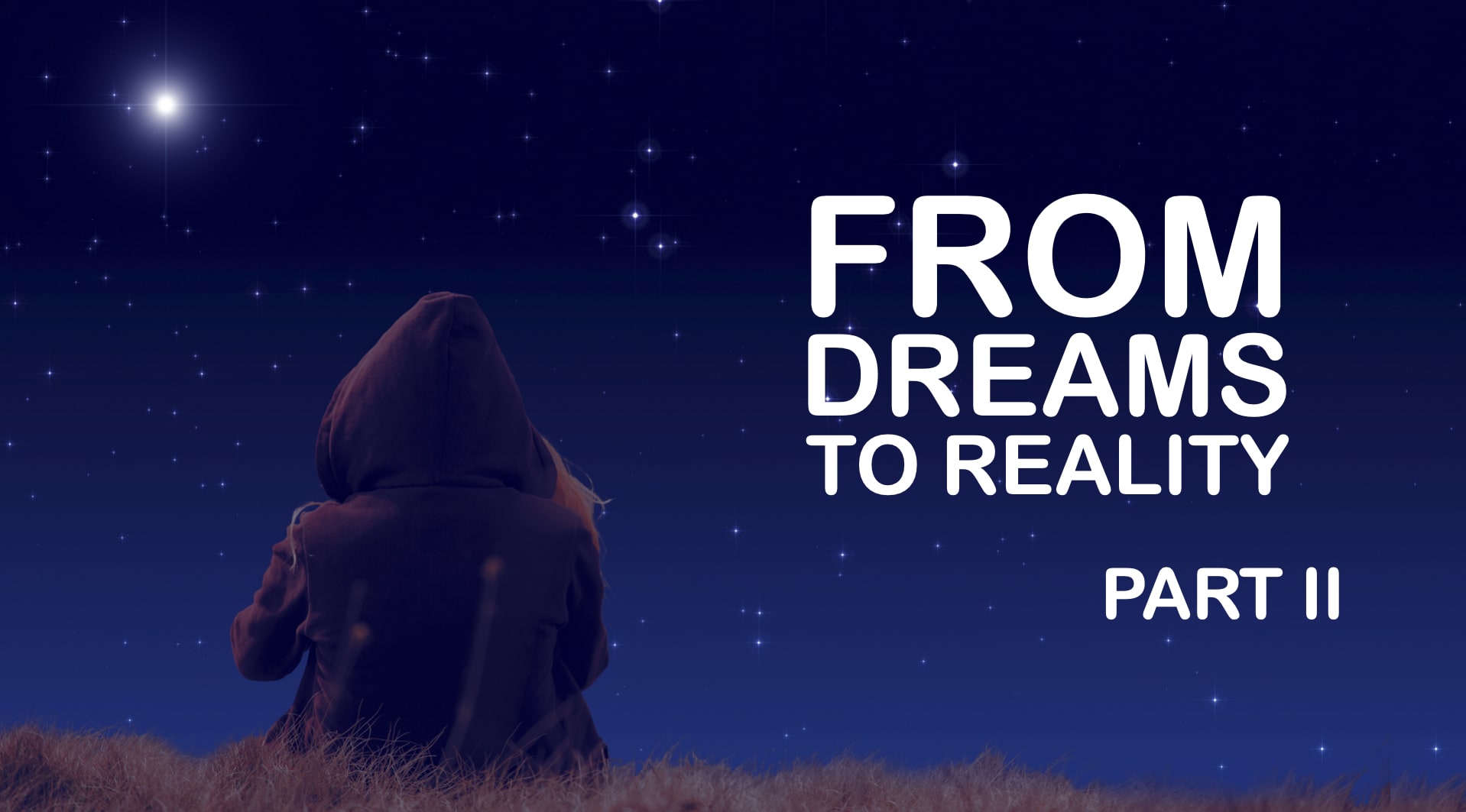 From Dreams to Reality Pt II

This morning we’re continuing our new series, From Dreams to Reality. If you weren’t here for part 1 last week can I encourage you to go and watch it on our web site sometime today as it will give you a good introduction to our topic and will help me to not waste too much time going over previous ground.

Today I want to talk about the dreams that gain Jesus’ attention. Not all dreams are created equal, you only have to spend a little bit of time on social media before you realise that a large number of people are pursuing a particular type of dream, a dream for their lives that’s wrapped up in their own happiness and personal advancement. Unfortunately there are enough of them succeeding in presenting a life-style that’s attractive to people who feel that they’re missing out, that it keeps others pursuing the same thing to their detriment. And I’m going to tell you why this morning.

I remember after I’d taken over as the senior pastor of Grace, a discussion I had with our young adults around the topic of dreams.

Before taking on our first church in Townsville I’d been a youth pastor for 9 years and a youth leader for 4 years prior to that and during that time I’d sat in countless youth meetings, Youth Alive rallies and conferences where great speakers had tried their best to capture the hearts of an emerging generation of young people with the message that God had a dream for their lives, a wonderful calling, that they’d been placed on this earth for a purpose and that their future was going to be amazing.

Now at first glance that sounds like a great message. What would be better than to tell a young person who’s feeling a little bit insecure about themselves that they had wonderful future ahead of them if they pursued God with everything they had. It all seemed so right back in those days when we knew everything.

It was only as I moved out of youth pastoring and into pastoring my own church that I began to see a troubling trend emerging. The young people who had been so passionately sold on pursuing their “God” given dream for their lives began to drop by the wayside. Life got tough and the things that they were expecting to happen weren’t happening the way they thought they should and so many of them began to give up on chasing their dream. It was like they’d been given a beautifully wrapped present only to find the box was empty. Some drifted out of the church, others threw themselves into their careers and made their bank balance their god, and others just let their circumstances dictate their path through life never regaining the passion and purpose they once had in their relationship with God.

I began to see that there was a flaw in the message that we’d been given. Now the message in itself wasn’t wrong but unfortunately the warning sticker had been removed.

The reason that it had been so successful initially, was that the hook that was used was an appeal to self.

It was all about my dream, my call, my vision, my purpose and in that self absorbed focus, were the seeds of its eventual undoing.

If the dream you’re pursuing is focused on YOU then you’re short-changing the world and potentially creating a destructive loop that you’ll be stuck in forever.

Have you ever bought something new? That you’ve had to save up for? How did you feel when unwrapping it. I remember my first iPhone. I had to get it sent from America because Apple didn’t sell the first iPhone outside of the US. I was pretty excited and for the first week I treated that phone better than anything else I’d ever owned but after the first few weeks something changed and I started to treat it just like everything else I’ve ever owned much to its dismay. You see I was now looking ahead to the next iPhone that Apple was looking to release – this one would be sold right around the world. What once satisfied me no longer did.

When my focus is myself I’ll start to take for granted everything around me and that will lead to dissatisfaction with what I have and a desire to reach for more.

Self is never satisfied for long. It always wants more.

The Apostle Paul talks about being satisfied and not staying on the wagon of self.

But godliness with contentment is great gain, for we brought nothing into the world, and we cannot take anything out of the world. But if we have food and clothing, with these we will be content. But those who desire to be rich fall into temptation, into a snare, into many senseless and harmful desires that plunge people into ruin and destruction. For the love of money is a root of all kinds of evils. It is through this craving that some have wandered away from the faith and pierced themselves with many pangs.

What does all of this have to do with dreams? I’m glad you asked but I think you might already know where I’m going with this.

The simplest and lowest form of dreaming is one that’s wrapped up entirely in what you can get out of life. Where you are the sole beneficiary of your dream coming to pass.

There are 4 types of dreams

The last two types of dreams are where we want to be aiming for.

To understand what makes up a beneficial dream and a God dream, there’s no better person in the Bible to look at than Jesus.

Jesus’ dream was never about himself, he made that incredibly clear over and over again. He didn’t come looking for fame or fortune, he came to do his Fathers will, he did good to everyone he met and sacrificed his life for the good of the world.

I came down from heaven to do what God wants, not what I want.

Jesus answered, “We should go to another place. We can go to other towns around here, and I can tell God’s message to those people too. That is why I came.”

When he came to the village of Nazareth, his boyhood home, he went as usual to the synagogue on the Sabbath and stood up to read the Scriptures. The scroll of Isaiah the prophet was handed to him. He unrolled the scroll and found the place where this was written:

“The Spirit of the Lord is upon me,
for he has anointed me to bring Good News to the poor.
He has sent me to proclaim that captives will be released,
that the blind will see,
that the oppressed will be set free,

and that the time of the Lord’s favour has come.”

He rolled up the scroll, handed it back to the attendant, and sat down. All eyes in the synagogue looked at him intently. Then he began to speak to them. “The Scripture you’ve just heard has been fulfilled this very day!”

I came into this world as a light. I came so that everyone who believes in me will not stay in darkness.

You need to go and learn what this Scripture means: ‘I don’t want animal sacrifices; I want you to show kindness to people.’ I did not come to invite good people. I came to invite sinners.”

Jesus responded, “Salvation has come to this home today, for this man has shown himself to be a true son of Abraham. For the Son of Man came to seek and save those who are lost.”

I came to give life—life that is full and good.

Follow my example: Even the Son of Man did not come for people to serve him. He came to serve others and to give his life to save many people.”

Jesus was fully committed to his Father’s dream. A dream that revolved around others. For God so loved the world that he sent Jesus so that whoever believed in him wouldn’t perish but would have everlasting life. This wasn’t about making a name for himself. He wasn’t interested in fame or fortune, he was focused on the good of others in fact Peter made sure to mention that in his talk with Cornelius’s household when he said

You know about Jesus from Nazareth. God made him the Messiah by giving him the Holy Spirit and power. Jesus went everywhere doing good for people.

And we wonder why Jesus’ life had such an incredible impact.

So what does this mean for you and I?

What type of dream should we have?

1) Every one of us should have a dream that lasts our lifetime.

You only have one life. You don’t get a dress rehearsal. When you’re living for a dream that’s greater than yourself, your life will always make a difference.

2) A dream that lines up with the heart of Jesus for people.

It’s actually quite simple isn’t it. Do good to others all the days of your life and you’ll be celebrated in the halls of heaven when you finally arrive.

3) A dream that requires us to change just as much as it seeks to change the world around us into a better version of itself.

All dreams that seek to benefit others will change us for our good.

4) A dream that if we were to see it come to pass, would leave the people in our world in a better place.

Without a clear dream your life will veer towards the loudest voice in the room and it will look for the path of least resistance when life gets tough.

Hitler only rose to power because good people didn’t believe enough in the dream of freedom for all, to challenge his rising megalomania.

As the Allies realised during WWII it’s never too late to turn things around. It may be a struggle but the end result will be worth it. It doesn’t matter how old you are, every day is a new day, an opportunity to move toward a dream that will leave your world in a better place after you’ve passed through.

Find your God dream and make it the rudder that steers your boat. Then when you’re tempted to make a decision that is selfish rather than loving you’ll do the right thing.

The next time I speak I’ll be talking about how you hone in on what your dream is without getting trapped in the prison of selfishness. In the meantime here are three things that you can be thinking about in the context of your dream.

Preview of my next message

The Kingdom,
Other people
Your strengths and passion 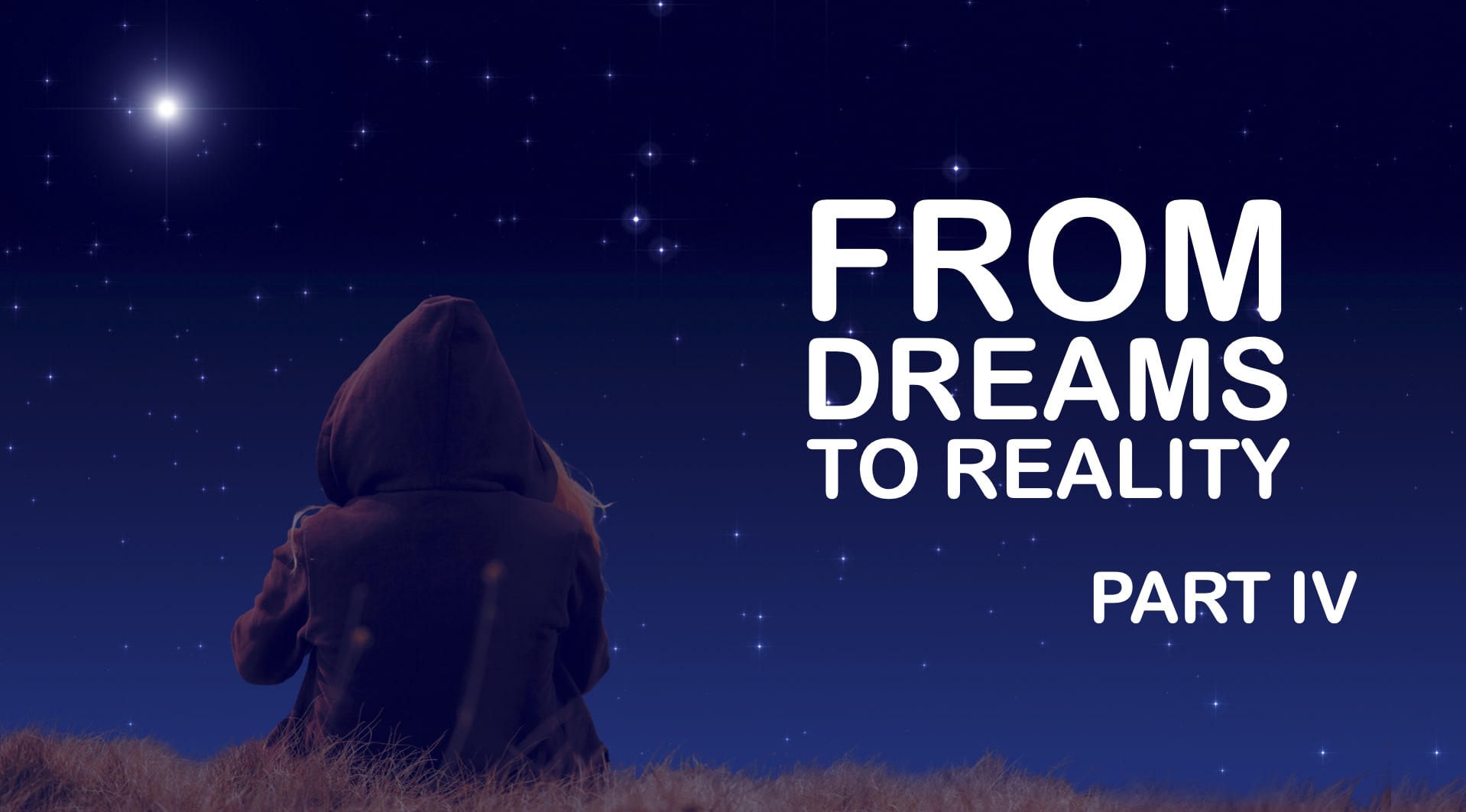 From Dreams to Reality Pt IV 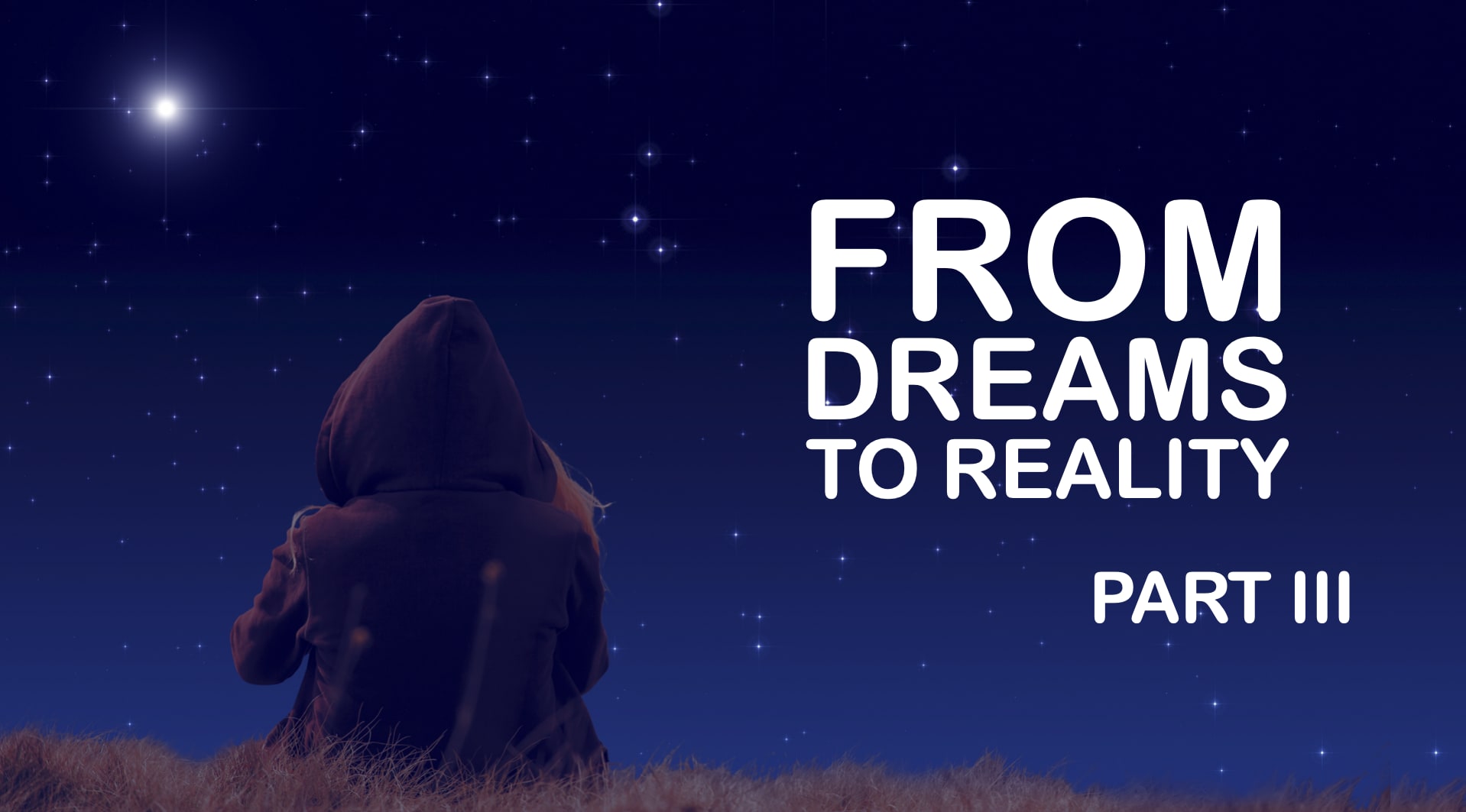 From Dreams to Reality Pt III 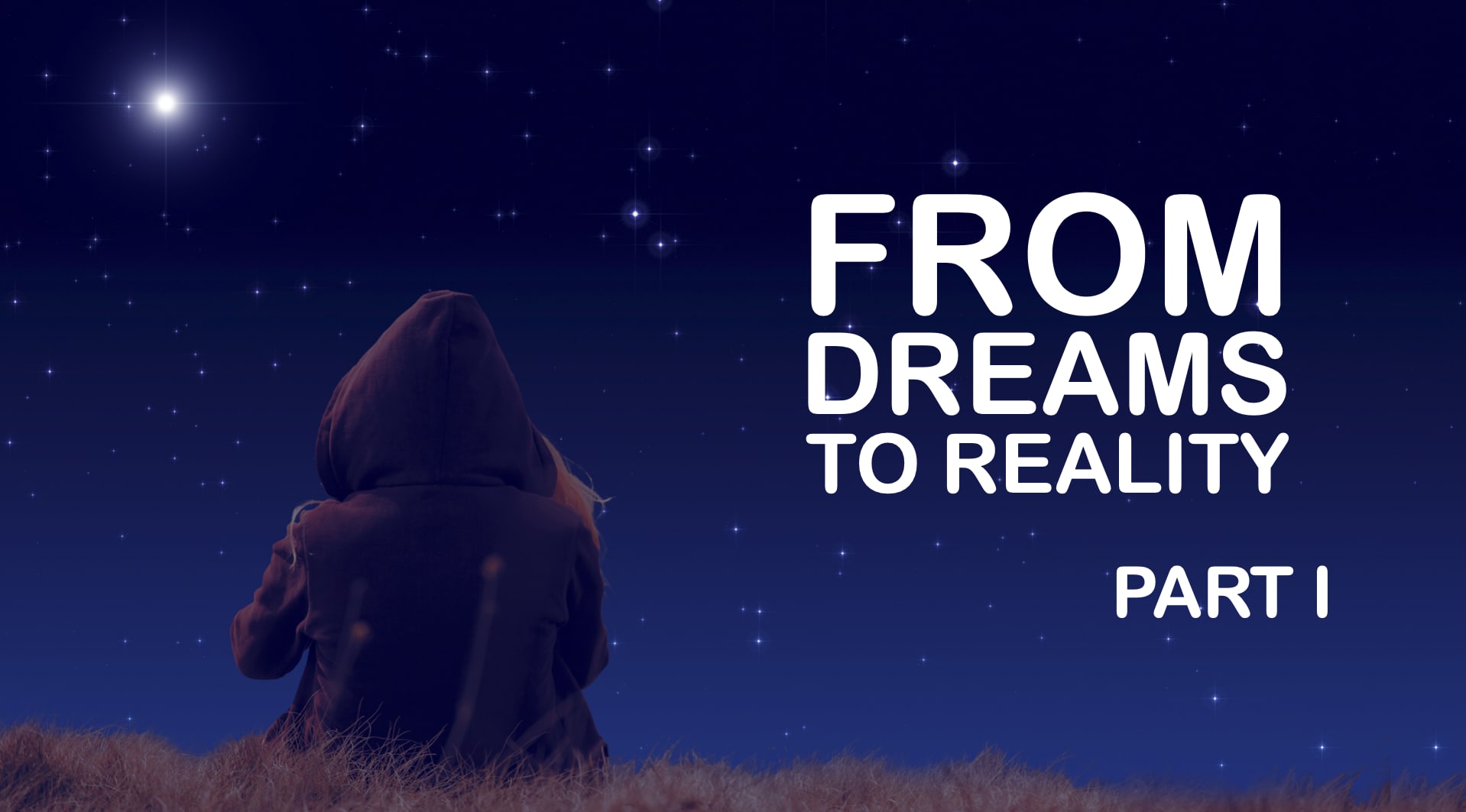 From Dreams to Reality Pt I